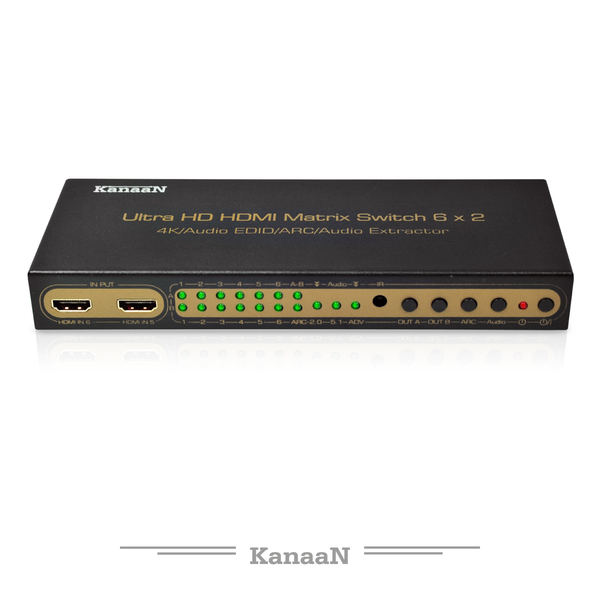 Prepare for the future with the KanaaN 4K 6x2 UHD switch!
The KanaaN 6x2 HDMI Matrix allows you to connect up to 6 HDMI signal sources, such as a UHD receiver, Blu-ray player or game console like PS4 or Xbox One, to 2 HDMI devices (e.g. TV, projector, monitor). The switch is able to transfer UHD signals at UHD resolution with 3840 x 2160 pixels - including 3D and ARC functionality. The switch is completely backwards-compatible so that existing equipment can be operated with new equipment. The switch has 6 inputs and 2 outputs that can be interconnected as desired. The PIP (Picture In Picture) function allows you to display the input signal as a inset window on your screen.

With the built-in audio output, you can transfer the audio signal directly from the switch to, for example, your home theater. Both an optical SPDIF output and a 3.5 mm jack are provided. The switch supports various audio formats. Via the optical output, Dolby 5.1 audio can be output. Via the 3.5 mm output, an analogue stereo signal can be output. Since the switch has ARC (Audio Return Channel), the audio signal from the LCD TV or projector can also be returned. The extraction of audio from video signals is possible via both outputs.The extraction of audio signals is possible independently of the video signals that are played back on output A and B and can be switched by remote control.

To protect the environment and prevent unnecessary paper wastage, you can find all instructions/manuals ready for download. This way you also can be sure to get the latest version!